The train has stopped and I mingle with the crowd coursing out, journeying up to the street where all go their own way. I am on the look out for a library.

“Wandering here in the wild
shadowed by the bright day
I look here, there, I’m a child,
liberate me from this dark play”

There is no one I encounter on my path; the sunlight pierces my eyes and I am going blind. The knowledge of truth is out of my reach.

And this is when I touch upon the undeniable sprout of insanity growing in me.

To bury my hands in loose soil, so to conceal them and embrace estrangement, was a choice. It is always a choice, only brought about by a fate that leaves you skeptical about the spirit of human.

I have a furtive understanding with those in my surroundings, which was not there earlier. And now when I meet them, they know that unlike them, I have many worlds colliding with each other. And sometimes I am in their realm and at other times, I am hollow when I am somewhere lost in the worlds of my own making.

I visit them quite often now, if not in my physical self but then, as a reminiscence, clinging to a wall as they sit and talk, unaware that the sun faces another eclipse.

“He is a Ravana with the ten heads,” they articulate. I cackle, my 320 teeth glinting in moonlight.

Linked up with VisDare 65. It has been a while since I last participated in a VisDare prompt and it is good to derive inspiration from this amazing photograph.

It was when the hero succumbed to the maenads’ seduction, when Bacchus appeared as the intoxicated child, wearing a tiara of vine leaves; a wine goblet in his hands, pouring the nectar down his throat, aggravating his thirst, as the fluid dripped out simultaneously.

“Uhhh..uhhhppp…” His hiccup resounded across the seven seas. “Come… join me… I have always got a space left beside me for the fools like you.”

The hero, who was still lost in the beehive hair of the maenads, nodded and joined Bacchus.

And this is how the gods took the soul of the last half-man.

* A 99 word story for Trifecta. The word of my choice for the challenge is Bacchus. 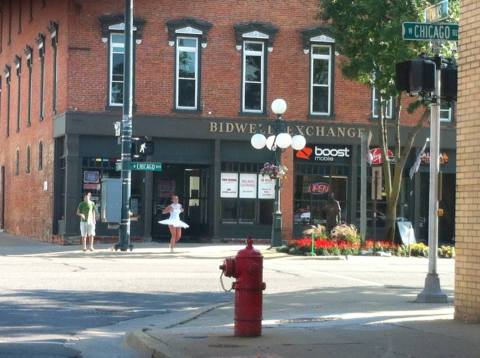 It was early morning and the usual crowd had not penetrated the streets. Only a few had made an appearance in the morning sunlight. The day was already so hot and humid.

A woman was prancing along the sidewalk when a man came along, “Good Morning darling!”

“Oh! Professor, you here… early… everything closed this area, open at night, all night. Come at 12; people wake up late…take time… and um… you come later,” the immigrant student replied, smiling.

“I had just come to meet you, sweetheart. I thought I must give you some extra lessons for your biology practical.”

She touched the little box in her pocket and smiled.

“I have got it. Today is the day,” she told her girlfriend.

“Wow! I am excited. I hope everything goes well.”

She finally left for her date. He was waiting for her at their meeting point with a bouquet.

“Thank you,” she gave him a customary hug.

“Well, you are late again,” he said apprehensively, “Actually I needed to talk to you about something. Shall we go to the restaurant first?”

He drove them to the new Italian place, where they had already made a reservation. After settling down on the table and placing their orders, she asked, “What do you want to talk about? Actually, I wanted to say something as well.”

He thought for a while and then replied, “Please go ahead.”

She nodded and brought that little box out of her pants pocket and handed it to him. He looked at her strangely, “What is there in it?”

“You can look for yourself. But wait; please do tell what you were going to inform me.” There was a certain edge to her voice, which he did not like.

“You know I would like to make things better between us,” he mumbled.

She did not say anything in return. Finally, he opened up the box. There was a ring in it.

“I don’t understand,” he remarked with a frown on his forehead.

“Goodbye!” she replied and stood up to leave.

She was already going towards the exit.

He rubbed his eyes and again looked into the small red box. It contained the ring he had given to her on their first marriage anniversary.

*For Writing Prompt: A Little Box.