I am nobody; I have nothing to do with explosions.*
My lips curved to the angle of my contrition; my bones
dry like sandpaper — I refrain from facing the sight
of my slow-breaking; I shade this night, and map it out
on my sea-green scars. Their wig-donned smiles abandon
me, to gawk at my graven loss, paying a hefty load for
the skein of my destiny.

I am somebody; I have something to do with shattering.
My ears bend to the tremor of voices that hearken to
the shell-shore of Calypso — ‘Shame,’ they call out in
my cerulean-blue sequined nerves. ‘Pity’, they resound it
through their cherry-twine jowls. They bury me in stones
and pull at the weight of my guilt, avowing their fealty for
the passing of my duality.

I am nobody || I am somebody
to evanesce — I only need be.

For With Real Toads’ Wordy Thursday, where we are starting off with a borrowed line from another poet’s work and Wordle 363 at The Sunday Whirl — a very raw third draft (with the closing couplet added to create a semblance of completion).

I haven’t read many classic books. Or shall I say I have completed only a few of those books which can be considered a classic?

I am presently reading Jane Eyre by Charlotte Bronte. I have started reading it yesterday; so it hasn’t been much that I have read. I am liking it so far. I haven’t read any of the work of Charles Dickens to my heart’s dismay. I am stuck in between of The Grapes of Wrath by John Steinbeck. I never completed To Kill A Mockingbird; I had crossed the half-way mark but then something came between me and the book.

The book I have read and liked a lot is The Catcher in the Rye by J.D. Salinger.

I liked the character of Holden Caulfield which is subjected to a lot of criticism. Many people believed him to be a selfish, heartless, ignorant, while I saw in him the quality of being a normal teenager. He has his own viewpoint which is quite strongly depicted in the whole novel. I could relate with his confusion and the feeling of just running away, that is a normal part of teenage. He is quite a cynic and resents others for somethings that do not even matter much. But aren’t many of us just like him?

He may anger you but think about it. What is wrong about him? He is not wrong; the society has deemed him wrong. I sometimes feel myself into his shoes and that is when I could see him clearly for who he is. He has his faults but I won’t consider his thoughts to be one of them.

Another book which I quite liked was The Bell Jar by Sylvia Plath. The depression and the journey of Esther Greenwood was too concrete for me. I would rather not discuss more about it. 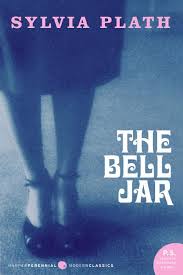 Here is my tribute to Sylvia Plath; a villanelle-

the lone bird, lost in the mirrors of time

hear, take it in, let it be found

moaning in pain, narrating the crime

her body decaying in the burial ground

she is gone, leaving behind her life’s dime

the years she spent but being bound

a prisoner to her own mind’s rime

leaving nothing behind her, no expound

just her work, her prayers, so sublime

the queen, amid the humanity’s grime

your voice still echoes around