A Fine Balance by Rohinton Mistry My rating: 4 of 5 stars

A Fine Balance by Rohinton Mistry, takes you on a whirlwind of a ride through some of the most difficult years of independent India, portraying its four main characters and a myriad of secondary ones, who face the problems of caste and communal violence, discrimination, poverty, “gundaraj” and the dreadful Emergency.

Emergency is a controversial period of India’s history. The elected PM, Mrs. Indira Gandhi, was accused of election rigging by the Allahabad High Court, which was followed by demands for her resignation. In order to stay in power, she(with the voice of the President) declared Emergency in 1975, supposedly to protect the country from internal disturbances and thereby suspending all the Fundamental Rights of the citizens. All her rivals, including members of opposition, trade unions, student unions, etc. were put in prison.

The novel begins with a chance meeting of two tailors, Ishwar Darji and his nephew, Omprakash Darji with a student, Maneck Kohlah on the local train in an unnamed city by the sea (Mumbai), who are all going to meet the same person, Mrs. Deena Dayal. The two tailors are to be hired by Mrs. Dayal for sewing clothes for an export company, and Maneck, who is the son of Deena’s childhood friend, is going to be a paying guest at her place.

We are then made aware about the background of the four characters. Deena strives to be an independent widow, the two tailors have come from the bitter experience of losing their family to caste violence, and Maneck has been sent by his parents to study in a college to get a diploma in air conditioning and refrigeration, which they consider to be a safe choice for their son’s future in the technically growing country.

Under the period of Emergency, each faces the perils associated with life. The two tailors are once kidnapped as a member of falsely gathered crowd for PM’s speech, they become prey to the demonic beautification(losing their jhopadpatti house and condemned to forced labor) and forced sterilization programs, brought about by the dictatorial reign. Deena continues to face the possibility of losing her house and Maneck is emotionally disturbed by the horrors he see taking place around him.

At its center, this novel narrates how these people come to live under the same roof, sharing food, and constituting a family like bond. Dina slowly begins to recognize tailors as someone equal, denouncing her prejudice towards their caste.

“In the WC, the tailors’ urine smell that used to flutter like a flag in the air, and in Dina’s nose, grew unnoticeable….Then it struck her: the scent was unobtrusive now because it was the same for everyone.”

The tailors grow fond of Dina and find a haven for themselves, sleeping in her veranda. Maneck gets over his depression over the world around him and life and makes some genuine friends. But everything changes. Such few moments of high turn into the worst fates imaginable. Rohinton Mistry, propagates a creation of a fine balance in life, of despair and hope, of struggle and survival.

“You see, we cannot draw lines and compartments and refuse to budge beyond them. Sometimes you have to use your failures as stepping-stones to success. You have to maintain a fine balance between hope and despair.’ He paused, considering what he had just said. ‘Yes’, he repeated. ‘In the end, it’s all a question of balance.”

But in the end, everyone loses everything that is vital. Everything decays, the despair wins over the hope and lives are irrevocably changed.

The most striking feature about this work is its true to life scenario and the character sketch and development is impeccable. Rohinton Mistry succeeds in explaining the hardships of the common man of India, through his powerful narrative and story line.

With the tale of intertwining fates and separation, this book pictures how it was and how it still is in some parts of India. The author must further be praised for such secondary characters like the Monkey Man, the hair collector, the Beggarmaster, the Rent collector, the Inspector, etc.

I would recommend this book to anyone willing to read something of significance and something that would make you empathize with the people around you in a new way. It must be taken into account though that it is a sensitive and depressing read.

I have been left in tears by only a few books. This is one of those books, which stirred such emotions like despair and helplessness in me. I thus wept for all that happens in the world and all that is brought forth by the interminable tide of time.

“What an unreliable thing is time–when I want it to fly, the hours stick to me like glue. And what a changeable thing, too. Time is the twine to tie our lives into parcels of years and months. Or a rubber band stretched to suit our fancy. Time can be the pretty ribbon in a little girl’s hair. Or the lines in your face, stealing your youthful colour and your hair. …. But in the end, time is a noose around the neck, strangling slowly.”
― Rohinton Mistry, A Fine Balance 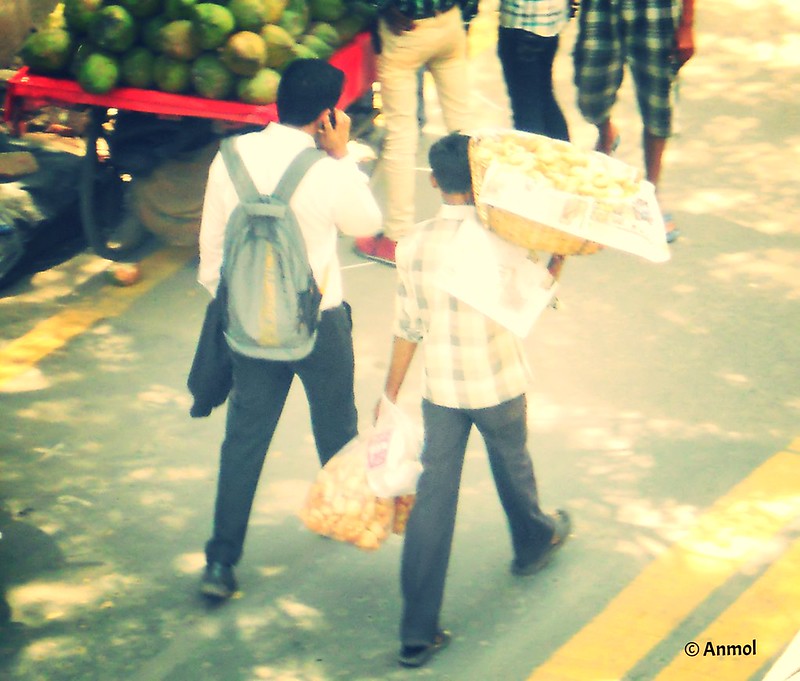 people pass by me in a haste,

while I keep on looking ahead,

I lick the cage of my mouth to taste

words that don’t appear, not a word leaves,

my teeth automatic on my lips nibbling

I am linking it up with G-Man’s Friday Flash 55.

Okay, I am continuing with the 30 Day Book Challenge. So, now is the time to discuss a book that broke my heart. That is a very powerful phrase. I don’t know if some book shattered my soul or broke my heart, as being mentioned. Yes, I have felt sad and there have been some books where i shed tears during some instances that were painful to read.

A Week in Winter is one such novel which stirred quite some emotions in me. It is written by Marcia Willett. I have mentioned it before but haven’t discussed it so far. I guess I am going to do that right now.

A Week in Winter is a family drama in simple words but it is much more than just that. It is an exploration of human emotions and how people come to see themselves and their relationships at various stages of their life. It tells of how complicated certain relationships can be and how a house can come to symbolize feelings of love and belonging. Maudie Todhunter is the protagonist who is the owner of a farmhouse in Devon countryside and she is going to sell it. And that comes out to be a central part of the entire story, which involves her step-daughter and her family along with a woman who comes to explore the country house by the name of Moorgate.

There are certain other stories involved enlisting many other characters but in the end everything comes together. This book gives you such a reading experience that you would laugh, smile, cry a bit, feel elated, a little frustrated. It is a complete package of human feelings and emotions.

Let me tell you, when did I cry in this book? It was when a character whom I come to adore died. It was already told before hand that she was going to die but finally when that chapter came, I felt really sad. Because she was someone I wanted to be like.

That is all for today.

juvenile, a little kid prancing around

playing along with his sharp ingenious mind

treading on an illusionary firm ground,

he fabricates a hero, powerful kind,

causes him to brawl against callous people

who would pester and mock him at his cripple,

he became the hero himself, set to fight

in that imaginary world of his sight